Palestinians reject Trump’s Middle East proposal, calling it a ‘conspiracy’ that ‘will not pass’

“Today, Israel has taken a giant step towards peace,” Trump said as Israeli Prime Minister Benjamin Netanyahu stood by his side.

“My vision presents a win-win solution for both sides,” he said, adding that Israeli leaders have said they will endorse the proposal.

Before the proposal was announced, Palestinians called it dead on arrival, saying it was an attempt to “finish off” the Palestinian cause. 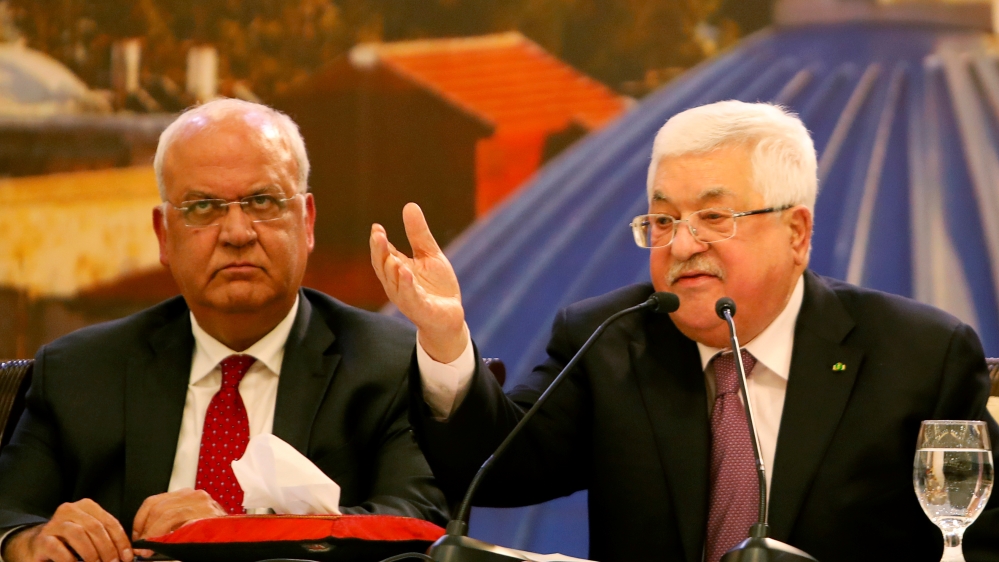 Netanyahu meanwhile said it was a “historic day” and thanked Trump for his proposal. He said if Palestinians agree to the plan, Israel will be willing to negotiate “right away”.

Trump’s initiative, whose principal author is his son-in-law Jared Kushner, follows a long line of efforts to resolve one of the world’s most intractable issues. Israeli-Palestinian peace talks collapsed in 2014.

The plan calls for a four-year freeze in new Israeli settlement construction, during which time details of a comprehensive agreement would be negotiated, according to Trump administration officials who spoke on condition of anonymity before Trump’s announcement. However, it was not immediately clear if the freeze could be extended if a final deal is not concluded within the four-year timeframe.

The officials added that the plan calls for the creation of the State of Palestine. It was previously unclear whether the plan would abandon the two-state solution.

Trump said Jerusalem will remain Israel’s “undivided capital”. But he also said under the plan, “eastern Jerusalem” would serve as a capital of a State of Palestine. He did not elaborate on what he meant by eastern Jerusalem. He later said on Twitter the a Palestinian capital could be in parts of “East Jerusalem”.

Trump had already recognised Jerusalem as the capital of Israel, moving the US embassy from Tel Aviv to the city. 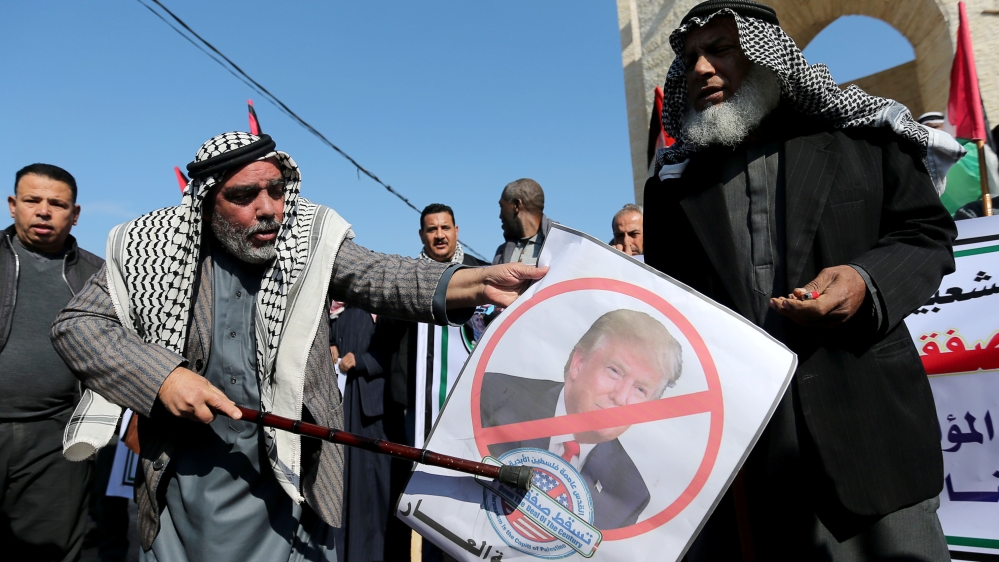 Palestinians take part in a protest against the US Middle East peace plan, in Rafah in the southern Gaza Strip [Ibraheem Abu Mustafa/Reuters]

Sami Abu Zhuri, a Hamas official, said Trump’s statement was “aggressive and will spark a lot of anger”.

Earlier on Tuesday, thousands of Palestinians rallied in the besieged Gaza Strip to protest the expected plan. Protests also took place in Ramallah, in the occupied West Bank.

Marwan Bishara, Al Jazeera’s senior political analyst, said the “the devil is not in the detail in this case”.

“The devil is in the headlines,” Bishara said. “What we have here is a very clever, devilish clever, repackaging of the chronic problems in Israel and Palestine and promoting them as solutions.”

Most regional leaders slammed the plan, but others cautiously offered encouragement for the Israelis and Palestinians to come to the negotiating table.

Jordan warned against “annexation of Palestinian lands” with the kingdom’s foreign minister warning against the “dangerous consequences of unilateral Israeli measures that aim to impose new realities on the ground”.

Numan Kurtulmus, deputy chairman of Turkey’s ruling Justice and Development Party (AK), also slammed Trump’s statements on Jerusalem, saying: “No, Trump! Jerusalem is the capital of the Palestinian state and the heart of the Islamic world!” 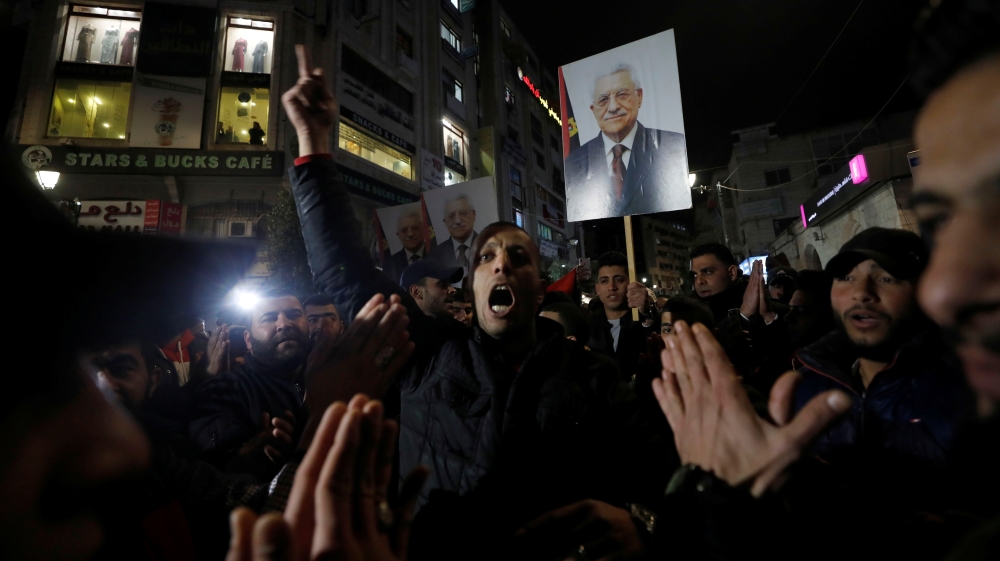 Lebanon’s Hezbollah movement called the proposal a “deal of shame”, adding that it was a very dangerous step that would have negative consequences on the region’s future, according to Al Manar TV.

It also said the proposal would not have happened without “complicity and betrayal” of several Arab states.

Egypt urged Israelis and Palestinians to “carefully study” the proposal. The foreign ministry said in a statement that the plan favours a solution that restores all the “legitimate rights” of the Palestinian people through establishing an “independent and sovereign state on the occupied Palestinian territories”.

The United Arab Emirates’s ambassador to the US said in a statement that the UAE believes Palestinians and Israelis can achieve lasting peace and genuine coexistence with the support of the international community.

The UN said it was committed to helping Israelis and Palestinians broker peace on the basis of UN resolutions, international law, bilateral agreements and the vision of two states based on pre-1967 borders. One such UN resolution was adopted by the Security Council a month before Trump took office in January 2017. The resolution demanded an end to Israeli settlements, with 14 votes in favour and one abstention by former US President Barack Obama’s administration.

Palestinians have previously said the US cannot be an honest broker for peace in the region, accusing it of pro-Israel bias.

In addition to moving the US embassy to Jerusalem, the Trump administration has also slashed hundreds of millions of dollars in humanitarian aid to the Palestinians and recognised Israeli sovereignty over the Israel-occupied Golan Heights.

The Trump administration in November reversed decades of US policy when Secretary of State Mike Pompeo announced that Washington no longer regarded Israeli settlements on occupied West Bank land as inconsistent with international law.

Kushner told Al Jazeera that the US believes Trump’s proposal is “the last chance for the Palestinians to have a state”.

“It’s time [for Palestinians] to let go of past fairy tales that quite frankly will never happen,” he added.

The proposal comes as Trump and Netanyahu face political issues at home.

Trump was impeached in the US House of Representatives last month and is on trial in the Senate on abuse of power charges. He also faces reelection in November. Netanyahu faces corruption charges and a national election on March 2, his third in less than a year. Both men deny wrongdoing.

Netanyahu’s election rival, Benny Gantz, who was also in Washington, DC, this week said he, too, supported the proposal.