A war of words on Wednesday erupted between the Presidency and Senator Rabiu Kwankwaso over the dethronement of Emir of Kano Sanusi Lamido Sanusi.

The Presidency denied the allegation, describing it as malicious and a wrongly calculated attempt  to create public hostility against  the President.

Amid the controversy, Sanusi’s successor, Emir Aminu Ado Bayero and the new Emir of Bichi, Alhaji Nosiru Ado Ibrahim were inaugurated on Wednesday, after receiving their letters of appointment from Governor Abdullahi Ganduje.

Sanusi, who congratulated the new emir, said he would not go to court over his dethronement.

Sanusi, the 14th emir of Kano, was dethroned on Monday and banished to Awe in Nasarawa State.

Kaduna State Governor Nasir El-Rufai on Wednesday named him as Chancellor of the Kaduna State University.

But, Kwankwaso who as governor, installed Sanusi as emir, alleged that Buhari gave the order for Sanusi’s sack.

“Leaders in Kano State Government themselves are saying they were given the order to dethrone the emir. He (President ) is the one that gave them the order,” he told the Hausa Service of the British Broadcasting Corporation (BBC) monitored in Kaduna yesterday by our correspondent.

He also denied the state government’s claim that his administration   queried the deposed emir thrice.

The former governor also faulted Sanusi’s banishment, saying he should have been allowed to choose wherever he   pleases to stay.

Kwankwaso said: “Let me begin by saying today is a very sad day in Kano, Nigeria and by extension, in the entire world, because His Highness the Emir of Kano (Sanusi) is a global personality.

“What we have seen is very sad, because, there is no respected  government that is supposed to take the kind of step taken by the Kano State Government by dethroning Emir Muhammad Sanusi II. But, the big issue is that, as enshrined by Section 35 of the Nigerian Constitution, even if you dethrone someone like the Emir, you ought to allow him  choose wherever he so pleases to stay. That is even when you follow due process to dethrone him.

“You see, leaders here in Kano State Government themselves are saying they were given the order to dethrone the Emir. He (President Buhari) is the one that gave them the order.”

Asked whether he advised the President to  intervene in  the rift between the Kano Government and Sanusi, Kwankwaso said the President does not need any prompting  from outside since he has many advisers.

He also denied the insinuation that  the Kwankwasiyya Movement was taking sides with the dethroned Emir, saying that, whoever knows the ideology of the movement would agree that it sides only with the truth.

Kwankwaso said: “The reason they are insinuating that we are supporting the emir and the emir is supporting us is because, His Highness, the Emir, had said repeatedly that, whoever won the Kano State governorship election should be given his mandate. Those are the kind of statements from the emir that got them (All Progressives Congress government) angry.”

Kwankwanso also picked holes in the processes  that led to the dethronement.

The most disturbing aspect of the whole saga, he said, was the way the government humiliated the people of Kano and Sanusi.

He also spoke on insinuations that, if he were still the governor of the state, he would have dethroned Sanusi , because he had queried the monarch thrice while in office.

The former governor said, “I never issued query to His Highness Emir Sanusi II or did anything that looks like that. What I know is that, if you are a governor or President, you are supposed to know that, you are a leader, helper of the people and lover of peace. You don’t need to use what you have like the security forces to muscle people like what we saw in Kano on Monday.”

In a statement, Shehu said opposition elements were spreading “politically-motivated and untrue insinuations”, over Sanusi’s removal.

The spokesman said: “President  Buhari has no involvement whatsoever in the dethronement of HRH Muhammadu Sanusi II from the position of Emir of Kano. All such insinuations are untrue, malicious and politically-motivated.

“The President does not have a history of intervening in the affairs of any state in the country, unless the issue at hand is of national consequence. On such matters, which impinge on national security, he has a duty of involvement as the law stipulates.

“As outlined in the constitution, the appointment or removal of emirs and other traditional leaders is strictly within the jurisdiction of state governments. It is unfair and disingenuous of opposition politicians to try to link the situation in Kano State to the Federal Government and the President.

“Although a General and former Military Head of State, President Buhari, clearly understands that, under the current democratic dispensation, the government at the centre cannot read instructions or twist the arms of all or any of the 36 state governments making up the federation. They all have their powers specified under the Constitution.”

Shehu hailed the people of Kano for being calm after Sanusi’s dethronement.

In his own statement, Ngelale accused Kwankwaso of trying  to leverage on the Sanusi  saga  “to   advance his  2023 presidential ambition.”

He said: “The former governor   is underestimating the intelligence of Nigerians. He thinks they cannot see through his futile attempt to leverage on the sensitive internal political situation in Kano State to advance his own 2023 Presidential ambition.

‘He wrongly calculates that he can manufacture public hostility against President Buhari and the ruling party in the state and region by saying that the President was behind the dethronement of an Emir in the State.

“He should know that such cheap tricks will not undermine the unparalleled popularity enjoyed by the President in Kano and in the region as a whole.

“Anyone who wants to be President of Nigeria should rather spend their time trying to convince Nigerians why they deserve votes instead of chasing after shadows.” 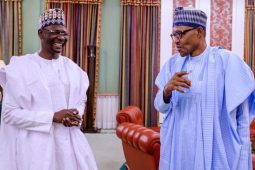 Governor Abdullahi Sule in whose state, Nasarawa, Sanusi is, on Wednesday met behind closed doors with the President at Aso Villa, Abuja.

No reason was given for the meeting. But, a source hinted that the governor discussed issues pertaining to the deposed emir, Lamido Sanusi with the President.

He said that they also talked about the security situation in the state which shares boundary with the Federal Capital Territory.